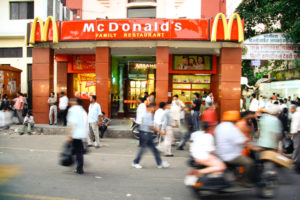 We’ve done several blog posts about the negative health impact of junk food’s growing popularity and availability around the world. Junk food consumption has been at the root of increased obesity and diabetes rates all over the globe and India is finding itself  greatly impacted. The New York Times recently published an article examining why India is facing a potential diabetes epidemic — in part due to their genetics.

Scientific research has found that Indians are more prone to becoming diabetic as a result of weight gain than people from other regions. The article goes on to explain several factors that scientists believe could be to blame for Indians’ predisposition to diabetes including body type, women being malnourished during pregnancy, hormones, and the adjustment from food scarcity to the food availability that comes with rising affluence.

According to The Times, there is a proactive movement afoot to reduce new diabetes cases by improving access to healthy food for younger generations. As awareness of diabetes increases in India, so does the number of people working to ban junk foods from schools and from advertisements that target children — despite push back from companies such as Coca-Cola, PepsiCo, and Nestlé.