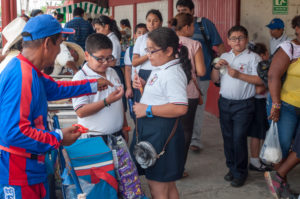 Mexico’s once largely isolated economy shifted in the 90’s when the North America Free Trade Agreement was enacted, allowing American goods to be brought into Mexico without high tariffs. The expectation was an improved economy for both countries but the long term effects of the agreement haven’t all been good. A recent article in The New York Times takes a close look at the negative health effects that have resulted from free trade with the US as our processed food and fast food consumption has become a way of life in Mexico over the last three decades.

The Times reports that foreign agricultural investment displacing family farm workers into cities in combination with a flood of American fast food and convenience store businesses opening south of the border has led to Mexico’s current reliance on Western, processed food. This American style diet has resulted in some equally American style health problems like obesity, diabetes, and heart disease. The article goes on to explain that some Mexicans even see their weight gain as a point of pride because they are well fed- a sign of prosperity.

This story parallels others we highlighted on this blog last year regarding cultures that once thrived on whole natural foods such as Brazil and South Africa becoming reliant on an unhealthy American diet. Access to processed food often results in a reliance on it and as American fast food chains and processed foods become increasingly affordable in other countries it is inevitable that the consumption, and resulting obesity rates, will continue to rise.