Home / MCNTalk / The Lick of Death 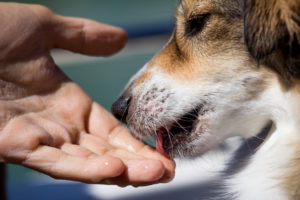 What once seemed like an innocent slobbery kiss from a dog now has the nickname “the lick of death.” Capnocytophaga canimorsus is a commonly found bacteria in the saliva of healthy dogs and cats. In most cases this bacteria is not harmful, but in rare cases this bacteria can get into the human blood stream and cause death.

Greg Manteufel has survived the lick of death, but not without serious losses. At the beginning stages of the infection he thought he had a fever or the flu, but then he became delirious and dark spots started covering his body that looked like bruises. His wife rushed him to the hospital and within a week, Greg had lost his legs and hands.