Unemployment rates fell to 3.8 percent in May, 2018 – an 18-year low — and the number of disability insurance claims and number of Americans seeking Social Security disability benefits is also dropping. Specifically, per government officials, fewer than 1.5 million Americans applied to the Social Security Administration for disability coverage in 2017, the lowest number since 2002. Applications are running at an even lower rate this year.

This article explains that because the economy is strong and maintaining steady rates of growth, employers are more willing to hire people from a diverse labor pool — including those with disabilities — and to make accommodations with job functions, pay, and other expectations. The strength of the economy also sparks a more optimistic attitude among people with disabilities searching through available opportunities.

Some other factors have also influenced this shift. One of these factors driven by basic demographic shifts is that as aging baby boomers receive Social Security retirement benefits and Medicare, they no longer require disability benefits. Additionally, because of the expansion of Medicaid in 33 states and the District of Columbia and the improved access to insurance coverage under the Affordable Care Act, the disability program has become a less obvious way for people to obtain health care coverage. A final factor the article identifies is that it is 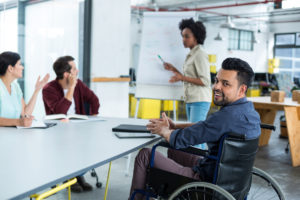 simpler hard now to qualify for Social Security benefits than it was in the past.

One case study explored in the article is that of Christian Borrero, who had been receiving Social Security benefits throughout his adult life. He  was offered a full-time job as a receptionist at Kurtz Bros, an amazing opportunity for full-time work with benefits, but also one where he would be earning less than his disability income, to the tune of $895 per month. Borrero chose full-time employment and as expected, his Social Security benefits emded. When his employers found out about his situation, they modified his position to include additional responsibilities, thereby raising his pay to cover his otherwise lost income. Although this wouldn’t happen in every case, Mr. Borrero hopes to inspire others with his story.