Home / MCNTalk / Is Alzheimer's Diabetes of the Brain? 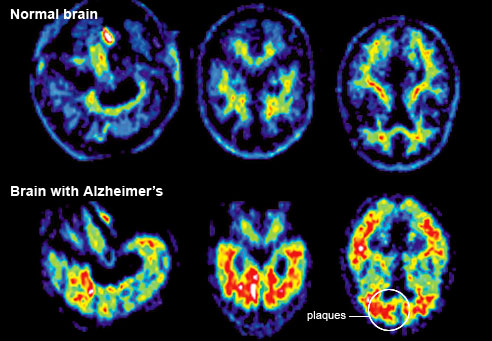 A timeline of a healthy brain vs. a brain with advancing Alzheimer plaques

If you knew that processed foods, sugar and starchy carbohydrates would cause Alzheimer’s, would you stop eating them for good?

The sad truth is that more than one-third of Americans are obese and the average person consumes a staggering 156 pounds of added sugar per year, according to the U.S. Department of Agriculture. But is the standard American diet affecting more than just our waistline?

Recent research studies have indicated that the link between processed foods and sugar and the development of Alzheimer’s could be much closer than we thought.

While the exact cause of the disease has not been proven, Dr. Suzanne DeLaMonte, a researcher at Brown Medical School found that the connection between poor brain function and memory loss could be a form of diet-induced diabetes – coined Type 3 diabetes after the 2005 study.

New York Times columnist Mark Bittman sheds new light on the discovery in his article, “Is Alzheimer’s Type 3 Diabetes,” explaining how Alzheimer’s may well be classified as Type 3 diabetes. He gives a clear picture of how insulin works in our body, how a lack of insulin creates countless health complications and ultimately why it’s becoming more apparent that Alzheimer’s may not simply befall us by chance.

“We all need insulin: in non-diabetics, it’s released to help cells take in the blood sugar (glucose) they need for energy. But the cells can hold only so much; excess sugar is first stored as glycogen, and — when there’s enough of that — as fat. (Blood sugar doesn’t come only from sugar, but from carbohydrates of all kinds; easily digested carbohydrates flood the bloodstream with sugar.)

Insulin not only keeps the blood vessels that supply the brain healthy, it also encourages the brain’s neurons to absorb glucose, and allows those neurons to change and become stronger. Low insulin levels in the brain mean reduced brain function… And when the cells in your brain become insulin-resistant, you start to lose memory and become disoriented. You even might lose aspects of your personality.

In a similar article, writer David DiSalvo specifically explains the negative effects of sugar on the brain and how it can seriously impair your cognitive functions, memory and may cause other diseases.

Research indicates that a diet high in added sugar reduces the production of a brain chemical known as brain-derived neurotrophic factor (BDNF). Without BDNF, our brains can’t form new memories and we can’t learn (or remember) much of anything.

Levels of BDNF are particularly low in people with an impaired glucose metabolism–diabetics and pre-diabetics–and as the amount of BDNF decreases, sugar metabolism worsens… Research has also linked low BDNF levels to depression and dementia. It’s possible that low BDNF may turn out to be the smoking gun in these and other diseases, like Alzheimer’s, that tend to appear in clusters in epidemiological studies.

Since the 2005 study, however, there hasn’t been much change or advancement in preventive treatments based on this idea. While a clinical trial did test the diabetes drug rodiglitazone (Avandia) for the treatment of Alzheimer’s, the results were mixed and without conclusion.

As a different part of her study, she also explains that nitrates, (a preservative found in cheeses, hotdogs, ground beef, smoked meats, and even beer) may also play a part in the equation. Nitrates, when heated, form the amino acid nitrosamine, which impairs how cells interact with insulin, she said. The solution, Dr. DeLaMonte suggests, may not come in the form of a new drug, but instead in making serious lifestyle and diet changes.

For those of us who have  family members or friends with Alzheimer’s, we know how quickly and painfully the disease invades and devastates their brain. What we can learn now from these various discoveries now more than ever, is that it is crucial to abandon the American diet of processed food and sugary substances and instead realize that these seemingly harmless habits are ruining our health and our brain.